The recruitment of young people to extremist causes 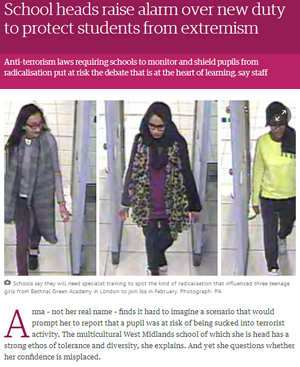 Over the summer holidays we have read reports of minors being taken into care because authorities have evidence of parents radicalising their children. Even Boris Johnson has been quoted in the Guardian as stating that radicalisation is considered child abuse and should be tackled head on. The surge in children being taken into care because of this reason is being blamed on the power of the Internet as a communication and networking tool, as well as the ease of access of social media. If recent cases are examples on this matter then it seems this maybe the case.

The latest reports suggest up to 550 young Britons have made the journey to Syria to join the frontline. We are also familiar with the story of five 15 year old girls from Bethnal Green who gave up everything to become Muslim brides for IS fighters. It's hard to believe that bright, intelligent, westernised girls want to leave loving families to possibly lead a life of suppression and hardship in a foreign land, far away from what they know and understand. The details are hazy about how this has come to be, but it's been suggested that there are certain websites openly trying to recruit young Muslim girls to be ‘IS wives’. Impressionable girls fantasise about the pin up style pictures of the ‘fighters’ and fall in love with the false notion of them striving for territory and justice. Reports have emerged from one girl who managed to escape the regime, that she was abused and kept as a prisoner in one room.

This has brought about a kangaroo court of accusations and counter accusations from both sides of the issue, with parents blaming the government for not doing enough and in turn the government batting it back, insisting parents need to be more vigilant and more acute to their teenagers changing behaviour and values. Blaming aside, teachers now see themselves on the frontline themselves, in the prevention of extremism amongst their pupils. Many of us feel the pressure from the government to make a difference but feeling, understandably, out of our depths. Are we able to begin to tackle this deeply entrenched issue? And do we feel totally confident driving certain messages in a politically correct environment where emotions are running high?

After operation Trojan horse was first introduced by Ofsted, schools have been doing their best with their PSHE curriculums by educating pupils about life in modern Britain in the belief that this will give students a greater sense of identity and patriotism. Ofsted seeking evidence that it's elements are being embedded cross curricular. Politically the government was keen to seen to be tackling the issue head on.

But because PSHE is still not compulsory and in some schools doesn't hold the gravitas needed to truly make an impact, it makes the practical task of teaching and challenging radicalisation very hard. Personally I was seeking confirmation from a political party during this election campaign to commit to making PSHE compulsory, I've been very disappointed and feel that it's a wishy washy contradictory message from our potential leaders. I cannot see any advantages of continuing with optional PSHE if they want measurable change. Making PSHP compulsory is the only way to ensure that issues such as these are given the time, teaching and focus it demands. Only last month Estelle Morris has highlighted the issue in the Guardian newspaper calling for exactly this.

As PSHE lead in my school, I have done some research about how my school can introduce the topic of extremism, teach pupils about the issue, challenge stereotypes and try to deter extremist views; I can recommend the 'prevent for schools' website, it is excellent. Set up by a team of organisations committed to the issue of stamping out extremism amongst young people, they promote different methods of teaching and learning activities such as theatre group visits and lesson plans. It's also very helpful in explaining safeguarding guidelines and procedures should you ever feel concerned about a particular pupil.

Perhaps a more unusual method, Humza Arshad is a young Muslim man with his own You Tube channel dedicated to deterring his audience away from extremism. He has over 200,000 followers and the Met have recruited him to talk in schools about his fight. He has the ability to reach young Muslims on their level and speak with a mixture of street credibility and authority- which seems to be a winning approach.

Looking forward, I suspect teachers will continue to be used as first base in the fight against radicalisation. If IS continue their high profile campaign it's inevitable that there will be ramifications for British born Muslims. With this in mind, I hope the government offers more support to the PSHE curriculum and even go as far to have regional task forces that have the ability to support and provide the clear and direct message needed to make a difference.

COMING SOON: We are currently developing resources to help tackle this issue in schools, with information for pupils, parents and teachers. TRS members will recieve email updates about these resources as they become available.